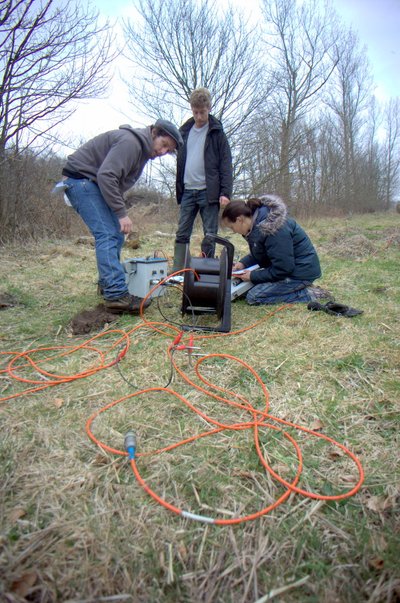 During the last decade the development of modern multi-electrode equipments has renewed the interest in Direct Current (DC) resistivity and Induced Polarization (IP) methods, allowing 2D and 3D reconstructions of resistivity and chargeability distributions within the soil with a reasonably fast acquisition time.

HGG is involved in two international projects; Cliwat and RiskPoint, in which DC/IP methods are being intensively used to characterize landfills, delineate their boundaries and study the interaction with underlying aquifers, also by the individuations of pollution plumes. A great deal of effort has been spent on optimizing the data acquisition procedures, in order to quantify the repeatability of measurements and the effect of electrode polarization on data quality. Furthermore, a new technique for TD IP acquisition in borehole has been developed and new inversion codes are in progress; codes for both 1D and 2D Time Domain DC/IP inversion are being developed, particularly suited for landfill characterization, and the expansion to 3D algorithms has been planned, which can also be used for the monitoring of CO2 sequestration (CO2-GS Project).

The 1D inversion approach for layered media takes advantage of the expertise of the group in both EM data analysis and inversion techniques.

The forward response is calculated in Frequency Domain (FD) from the complex conductivity distribution generated by the chargeability model (i.e. the Cole Cole model) and then converted to the TD using the Hankel transform. The inversion is carried out using the same 1D LCI framework previously developed by HGG. This approach has significant potential, including:

The possibility to model the analog and/or digital filters that usually are present in acquisition equipment for noise suppression in voltage measurements and the capability to perform joint inversion with other methods (i.e. TEM) already implemented in the 1D LCI inversion kernel (AarhusInv).

The 2D inversion is being developed following two different approaches: calculating the exact solution by means of FD calculation of the forward response followed by transformation to TD, like the 1D algorithm and calculating the approximate solution by inverting separately the different time gates with a DC code, substituting in differential equations the convolution of time dependent conductivity and electric field with a multiplication.