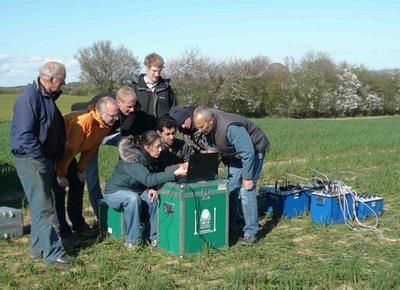 MRS is based on Nuclear Magnetic Resonance (NMR) and allows the non-invasive detection of free water in the subsurface.

A pulse of oscillating current at a given Larmor frequency (which depends on the Earth’s magnetic field and varies between 800 and 2800 Hz around the world) energizes a loop on the surface and after the current is switched off, the Free Induction Decay (FID) signal from groundwater is measured with the same loop, acting as receiver. The initial amplitude of the signal is directly proportional to water content and its decay time depends on mean size of the pores. After processing and inversion of the data, the water content and relaxation time of the reservoir versus depth are extracted. Based on these parameters and using borehole pumping test data for calibration, the hydraulic conductivity and (more reliably) transmissivity of aquifers can be also estimated.

A multi channel MRS instrument (NUMIS Poly) owned by HGG group is being used for research activities and in contribution with different projects such as Risk Point, CLIWAT, CO2-GS and NICA.