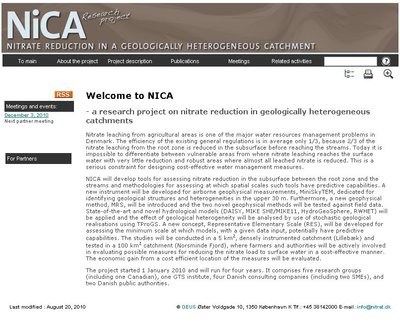 Nitrate leaching from agricultural areas is one of the major water resource management problems in Denmark. The efficiency of the existing general regulations is in average only 1/3, because 2/3 of the nitrate leaching from the root zone is reduced in the subsurface before reaching the streams. Today it is impossible to differentiate between vulnerable areas from where nitrate leaching reaches the surface water with very little reduction and robust areas where almost all leached nitrate is reduced. This is a serious constraint for designing cost-effective water management measures. The aim of this project was to come up with an efficient method to differentiate between high and low nitrate reduction areas.

HGG played a part in the NICA project by mapping subsurface characteristics. A new extremely high resolution SkyTEM system was developed and was used for mapping very shallow geological heterogeneity. Magnetic resonance sounding (MRS) was used as a technique for non invasive and fast estimation of the subsurface hydraulic parameters.

The NICA project was carried out in close cooperation with GEUS, The University of Copenhagen, Laval Universiy, Aarhus Geophysics, the Danish Agricultural Advisory Services, ALECTIA A/S, SkyTEM, DHI and the municipalities of Aarhus and Odder.