The Aquifer India Mapping (AQUIM) project was a USD 1.8 million pilot study to map aquifers in six different project areas in India. It was funded by the World Bank and the Indian Government, Ministry of Water Resources. The investigated sites were selected to be representative of the complexity of Indian hydrogeology. They included; Ganga Basin in Bihar, hard rocks and desert in Rajasthan, basaltic traps in Maharashtra, crystalline rocks in Karnataka, and costal sediments in Tamil Nadu.

Based on the outcome, the project was planned be scaled across India; the final goal was to develop a cost-effective tool to supply and manage high-quality water resources while they are becoming physically and economically scarcer and scarcer.

The official agreement between the HGG and the Indian National Geophysical Research Institute (NGRI) was signed on October 15, 2012. 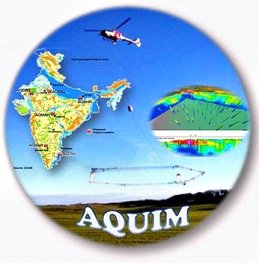 The six surveys were performed with state-of-the-art heliborne electromagnetic methods, by which large areas are quickly mapped while maintaining a high degree of details due to the close alignment of flight lines. The data acquisition consisted of 13,800 line kilometers and started at the beginning of March, 2013, lasting several months.

A further AQUIM goal was the knowledge transfer between the different partners; hence the HGG and it's subcontractor SkyTEM Survey ApS also assisted the Indian colleagues in the processing of the vast amount of collected data and in the use of advanced software for geophysical data-management and interpretation.