The AQUIM agreement between the Aarhus University and the Indian National Geophysical Research Institute (NGRI) was signed on October 15, 2012. 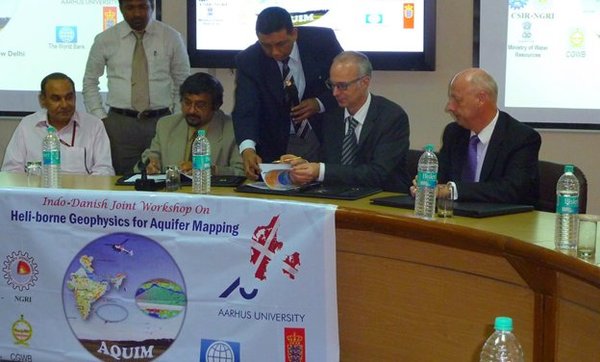 The cooperation agreement was signed by the respective project partners the 15'th of October, 2012.

Immediately after this important event, the HGG and SkyTEM Survey ApS started the preparation for the equipment shipping. Since the instrumentation has to go through long customs procedures and the necessary accreditation from the Indian aviation, the geophysical equipment will be sent from Denmark no later than the end of November 2012. Thus, the acquisition can reasonably be expected to start at the beginning of March 2012.

At the same time, the HGG is collecting the satellite images and all the other available georeferenced information concerning the survey areas to better design all the details of the airborne acquisitions.
Moreover, dedicated, novel, inversion tools have just been developed and implemented to tackle the possible difficulties of the Indian datasets. For example a new algorithm to recover, with higher spatial resolution, sharp boundaries targets has been recently included in the Aarhus Workbench. 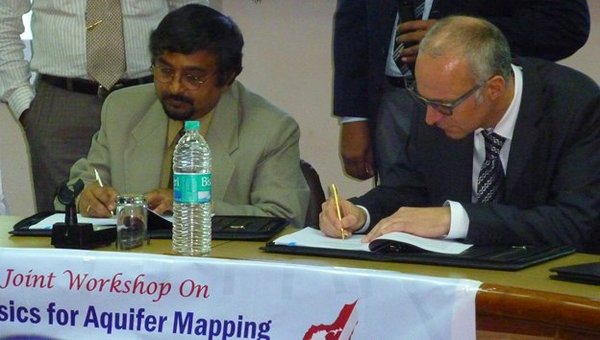 Signing of the agreement during the joint workshop for Aquifer Mapping which was held in India in October, 2012.

At the beginning of 2013, a training course will be held in Hyderabad. Hence the Indian scientists and technicians will be able to process and invert the huge amount of data that it is going to be collected during the spring of 2013. Actually, the inversion and interpretation phase will start just a few weeks after the beginning of data acquisition. In this way, the data from one site will be analyzed immediately, without waiting the end of the entire acquisition phase.

By following this schedule, we are sure to complete the project within September 2013.